Earlier this year, the court agreed to explore restricting its 2020 McGirt decision, which the state claims have caused turmoil in its courts.

Victor Castro-Huerta, who was charged with the malnourishment of his 5-year-old stepdaughter and has subsequently pleaded guilty to a federal child negligence charge and is awaiting punishment, is the subject of the state’s appeal.

He was convicted in state court, but his conviction and imprisonment were reversed as a result of how state courts read the statute following the McGirt decision. The state appealed with Republican Gov. Kevin Stitt’s strong support, and it’s the latest stumbling block in his relationship with tribal leaders in the state.

Cherokee Nation Chief Chuck Hoskin on Gov. Kevin Stitt: “In my opinion he’s the most anti-Native American governor in state history. I think his defeat would be met with applause by many tribal leaders, certainly by me.”(from @AP) https://t.co/U3eazYLlu8

The Supreme Court declared in the 2020 case that a vast portion of eastern Oklahoma remains an American Indian reservation. The ruling only applied to the Muscogee reservation, but it paved the way for similar lower court decisions upholding the historic reservations of several other Oklahoma Native American tribes, including the Cherokee, Chickasaw, Choctaw, Quapaw, and Seminole nations, which cover nearly the entire eastern half of the state.

Read More: What Ali Wong Said About Estranged Husband Justin Hakuta and Marriage in Her Comedy Before Split

The ruling, issued by Justice Neil Gorsuch, meant that Oklahoma prosecutors were no longer allowed to prosecute American Indian defendants in areas of the state, including most of Tulsa, the state’s second-largest city with a population of about 413,000 people.

“Oklahoma has been deprived of the authority to prosecute crimes,” Stitt stated during his State of the State speech in February. 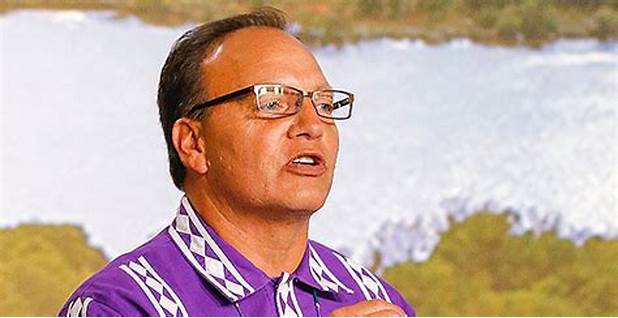 Normally, the Supreme Court does not revisit its decisions so quickly. The state, on the other hand, claimed that crimes go uninvestigated and unpunished because federal officials — who can file criminal prosecutions on tribal grounds — are overburdened.

“This week, the state will argue in front of the Supreme Court that it has the authority to safeguard Indian victims,” his spokesperson, Carly Atchison, said.

After the state’s motion to overturn McGirt was denied by the Supreme Court in January, Principal Chief Chuck Hoskin Jr. of the Cherokee Nation, the state’s most populous tribe with nearly 261,000 citizens, believes Stitt is attempting to take away tribal sovereignty.

“I think his purpose today is to nibble away at McGirt,” Hoskin remarked, referring to the treatment of Native Americans in the 19th century.

Chief Gary Batton of the Choctaw Nation agreed, calling the state’s appeal and Stitt’s backing for it an attack on tribal sovereignty.

“It’s strained our connection…” I’d like to believe it’s a lack of knowledge” of treaties between two independent governments, the United States and the Choctaw Nation, rather than a lack of education. Batton explained.

Read More: Rihanna Opens Up About Her Relationship with A$AP Rocky

“The more he refuses to embrace history and what the United States agreed to do, and who we are as a Choctaw Nation,” Batton added, “it gets harder and harder.”

Last October, the Inter-Tribal Council of the Five Civilized Tribes, which includes leaders from the Cherokee, Chickasaw, Choctaw, Muscogee, and Seminole nations, revoked a resolution praising and congratulating Stitt, a Cherokee Nation member, on his election as governor.

Stitt and tribal officials had a previous spat over Stitt’s ambition to renegotiate tribal gaming compacts that he said were about to expire. In disputes over the gambling issue, federal and state courts decided against Stitt.

Stitt has lost popularity among Native American voters as a result of his conduct.

“He undoubtedly has,” Hoskin added, “and in my judgement, he is the most anti-Native American governor in state history.” “I believe many tribal leaders, including myself, would applaud his rejection (for reelection).”

Stitt has had problems “with a limited number of top officials of the tribes,” according to Donelle Harder, Stitt’s reelection campaign manager, but has good ties with tribal residents he encounters throughout his travels around the state.

“I believe that every Oklahoman understands that this is an important dialogue that needs to be conducted, and that no one group or organization should have the authority to dictate the destiny of all 4 million Oklahomans,” Harder said.